“NEVER DOUBT THE POWER OF A SMALL GROUP OF DEDICATED, COMMITTED CITIZENS TO CHANGE THE WORLD; INDEED, IT IS THE ONLY THING THAT EVER HAS.”

“Eric Stumacher and the Sonad Project have tapped into something fundamental and extremely important. We are very enthusiastic in our support of Sonad Project’s mission to use artistic performance to cross human divides. The world needs this now more than ever.”

The Sonad Project, founded by Eric Stumacher in October 2007, was incorporated in November 2007 in California, with an office in New Hampshire.

The Sonad Project is an outgrowth of the Apple Hill Playing for Peace Project, founded by Eric Stumacher in 1987 and directed by him for over twenty years.

Playing for Peace is a powerful tool for crossing human divides using the format of chamber music. Sonad was founded to expand this mission beyond the small percentage of the global population who are chamber music players and concertgoers.

Sonad activities since 2007 included several trips to the Middle East, plus numerous events and activities in the US, including a nationwide NPR broadcast, “Sonad Project: Inspiring the Crossing of Human Divides Through Artistic Performance”: http://www.nhpr.org/node/26499 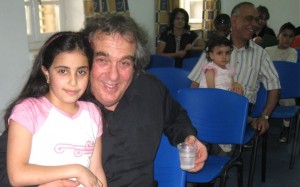 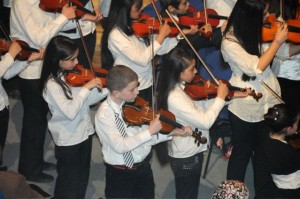 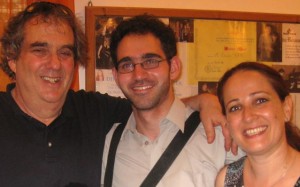 With Yoni and Lena in Jerusalem

Sonad activities have historically include concerts and workshops in the Middle East, New Hampshire, California, and other US and international locations, plus our signature annual workshops and Mozart Piano Concerto Festival at Glen Brook in Marlborough, NH.

Sonad Project is grateful for support from individuals, foundations, and corporations worldwide in order to bring to fruition these exciting activities in 2010 and beyond:

* A residency, including orchestra, solo, and chamber music concerts, and classes, throughout West Bank/Palestine, with Al Kamandjati, whose mission is to improve and inspire the lives of Palestinian children and their families by providing world class music instruction and concerts for refugee camps and villages in West Bank and Lebanon.

* A residency in Damascus, Syria, including workshops, master classes, orchestra concerts, and recitals.

* The purchase of a Steinway concert grand for Sonad, to be placed with Al Kamandjati in Ramallah and used for concerts throughout the region.

* Sonad workshops, including music and other arts performance endeavors, as well as Sonad concert tours, in New Hampshire, California, South Africa, and the Middle East.

* The ongoing commissioning of solo, chamber music, and orchestra compositions which feature the crossing of human divides.

John Steinmetz’s Thee Pieces for Wind Dectet which Sonad helped create by putting together a commissioning consortium throughout the US, and can be viewed at :