THURSDAY JAN 14: Wheels up from Boston, one day after a classic Nor-easter in New England — 16 inches of snow has been nicely plowed prior to our transfer to Logan Airport, and the flight is on time. After a layover at Charles De Gaulle Airport in Paris, we arrive in Amman Friday evening January 14. The time between leaving our home in Nelson, NH and our arrival at our hotel in Amman is 25 hours. 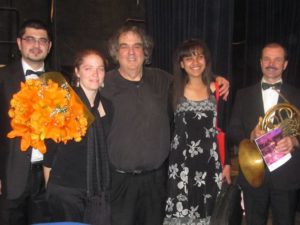 With members of the Amman Symphony Orchestra after January 19 concert

The Amman Symphony has engaged me to  conduct an all-Beethoven concert: Egmont Overture, Piano Concerto No. 4 with myself as soloist, and Symphony No. 4. 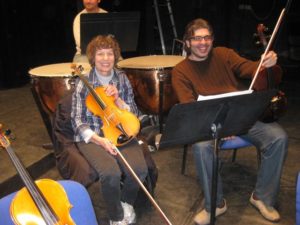 The other musicians, all Jordanian, are high-quality players and fine people, and it is a pleasure to work with them. The orchestra sounds just great! The concert is an absolute pleasure.

The concert is extremely well-received by the enthusiastic, large audience. We were told by the ASO members that audiences in Amman are restrained in their applause, but they greet the end of the program with a standing ovation. 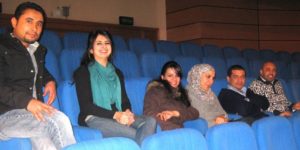 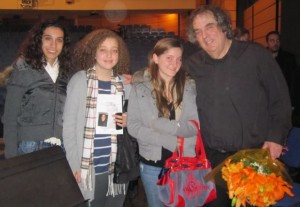 Being greeted by audience members backstage after the concert 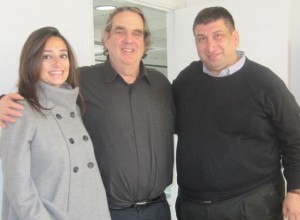 With Lamya, ASO PR and Activities Director, and Hisham, ASO Manager and former Manager of the Iraq National Symphony

Prior to transferring mid-morning to Kings Academy in Madaban, 30 miles from Amman, we meet with members of the ASO administrative staff. We praise them effusively for putting in place a high-quality, fine professional orchestra. This is a wonderful accomplishment. We also encourage them in their quest for a concert venue  with more satisfying, even flattering, acoustics — perhaps a church in Amman.

We had originally planned to do a concert with John Steinmetz’ newly completed work, “On My Way”, for children’s chorus and orchestra, but there turned out not to be sufficient time to train the chorus, so we will defer that performance to a future ASO concert. 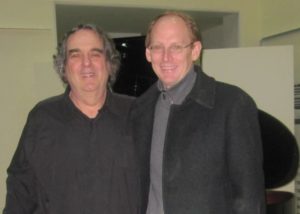 Upon our arrival at Kings Academy, we have the honor of meeting with John Austin, the new Headmaster. We then perform for the all-school assembly, offering a Scarlatti Sonata and John Steinmetz’ Etude No. 2 for Piano and Audience. The audience enjoys our prompt in the Scarlatti to act like royalty, since Scarlatti wrote his music for the Spanish Court in the early 1700’s. Teachers tell us after the assembly that they have never experienced the 400 KA students being so quiet. The Steinmetz involves audience clapping, which is a joyful release. 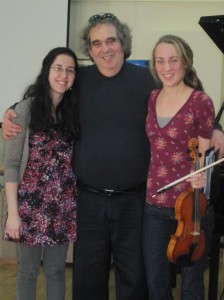 We spend the afternoon  rehearsing with our good friend and host, Kings Academy Music Faculty Member and Sophomore Dean of Students Reem, for our concert on Friday night, and coaching chamber music and several students in a piano master class. It is a privilege to connect with so many students. 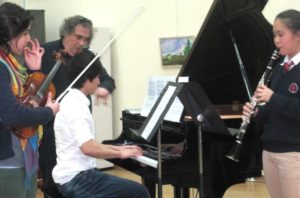 Coaching the Milhaud Trio for clarinet, violin, and piano 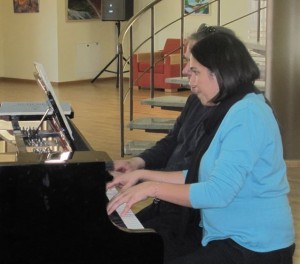 Rehearsing with Reem in the KA Gallery 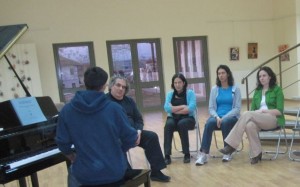 Friday begins with a coaching of Reem’s Youth Orchestra, containing young musicians from the National Music Conservatory and student musicians from Kings Academy. We work in detail on scales, chords, and antiphonal rhythm exercises, and the payoff  is that when they play Copland’s”Tis a Gift to Be Simple”, the music for which they have just received, they sound fantastic. The parents observing the rehearsal shout out their praise. 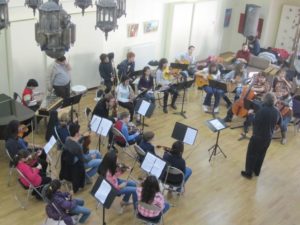 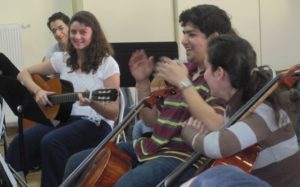 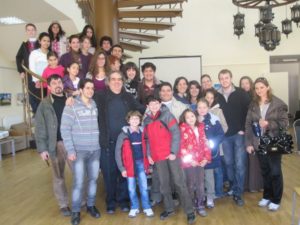 Youth Orchestra with teachers and parents after rehearsal

Although our Sonad concert Friday evening is in direct conflict with the quarter-finals of the Asian Soccer Football Cup, with both Jordan, and Japan (where Rujii, the KA dance instructor, hails from) playing, we have a lovely and enthusiastic crowd. Not everyone watches the soccer on TV. The recital  starts with some Sonad tour slides, then moves to three Scarlatti Sonatas, three four-hand pieces with Reem — Schubert A Major Rondo and Dvorak Slavonic Dances in E Minor and G Minor, a Chopin group, and ends with the Steinmetz’s Etude No. 2, with audience clapping, a reprise of yesterday’s performance at the all-school meeting. A good time is had by all. 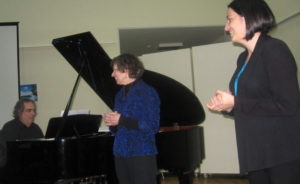 Kathy and Reem leading audience participation clapping in Steinmetz’ Etude No. 2 for Piano and Audience which concluded the recital 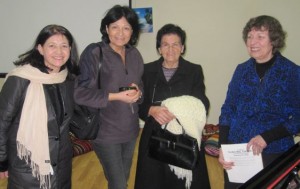 Kathy Stumacher with Reem’s aunts and grandmother after the recital 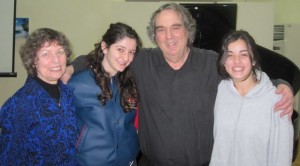 Kathy and Eric being greeted by students after recital

On Saturday and Sunday, we get to decompress a bit. We enjoy some knafi — an amazing traditional Arab sweet- with Reem at her favorite Arab sweet place in Amman. It is fun to compare the knafi in Amman with the knafi we had last month in Nablus, West Bank/Palestine.  Both are delicious, but different — more cheese in Amman.  We partake of  succulent traditional food in Amman and Madaban, and also talk at length about future Sonad possibilities, which will be exciting to explore and pursue. 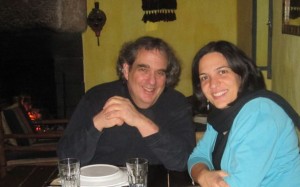 With Reem at our favorite restaurant in Madaban 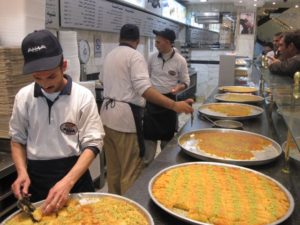 We also have wonderful hospitality, including a remarkable meal, with Tanya Twal’s parents and their extended family in Amman. Afterwards, Tanya’s father takes us to the top of Mt.Nebo outside Madaban, the site where Moses was said to have seen the Promised Land from afar, although he did not live to actually go there. 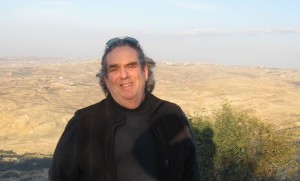 On the top of Mt.Nebo in Madaban, overlooking the Promised Land

The Middle East is in the throes of political upheaval. We watch with apprehension, but with hope. The possibility of life being better for millions of people exists.

Sonad’s mission — to foster equality and freedom amongst all peoples, and to inspire the crossing of human divides through music and art, feels more vital and on point than ever.

Thank you to all of you who make our continuing work possible! We are moved and honored by your friendship and support.

With all our love, 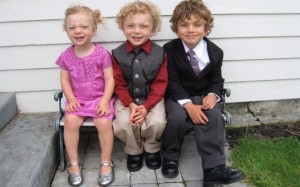 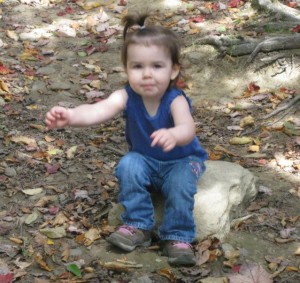 And our granddaughter Corrin