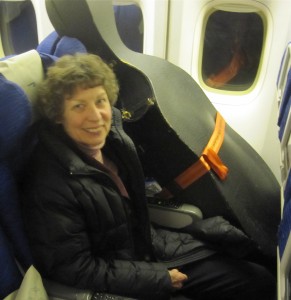 DECEMBER 10, 11 12 – Off to Ramallah; Delivery of cello for transport to Gaza Music School…

The story of this trip is the story of the Sonad Residency at the Edward Said National Music Conservatory, with master classes and concerts in Ramallah, Jerusalem, and Nablus, combined with the delivery of a second Sonad cello, this one donated by Josh Schein, into Ramallah for transfer on permanent loan to the Gaza Music School.

In the aftermath of the epic, and ultimately successful, one month voyage of the Sonad cello to Sdiq Aziz in Iraq this past March, sonadproject.org/2010/03/22/sonad-cello-enroute-to-sdiq-aziz-in-iraq/, the Sonad Board passed a resolution in its April meeting in Los Angeles that Sonad would prioritize the acquisition and placement of as many instruments as possible on permanent loan with worthy individuals and institutions around the world whose acitivities reflect Sonad’s commitment to promoting the freedom and equality of all peoples through music and the arts.

On the heels of this resolution, at our concert in Point Reyes, CA on April 18, audience member Josh Schein told us that he was very moved by the pictures of Sdiq receiving the Sonad cello in Iraq, and that he wanted to donate the cello of his youth to Sonad for a similar placement.

During our Sonad March 2010 tour to the Middle East, our friend Ziad Khalaf, the Executive Director of the Al Qattan Foundation in Ramallah, told us of his organization’s efforts to rebuild the Gaza Music School, which had been destroyed by the Israeli bombings.

The Gaza Music School has obtained the services of some  fine European teachers, is now teaching close to 100 students in a make-do post bombing facility, and is looking for instruments. The new Sonad cello emerged as an excellent fit. 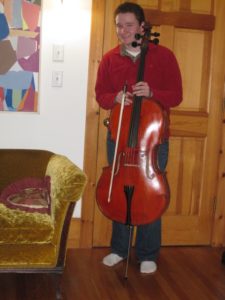 After a Sonad Recital at Bryn Gweled Homesteads near Philadelphia in July, we drove down to Washington, D.C. and picked up the cello from Josh’s mother. We remember the day well because it was the hottest day of the year, and those of you who have been there know that there is nothing quite like peak summer heat and humidity in Washington, D.C.

In the fall, our good friend, marvelous cellist, and Keene Chamber Orchestra colleague Jacob MacKay helped us by playing the cello a bit — the first time it had been played in 2o years — doing some research on the instrument, and showing us that the instrument sounds quite beautiful.

Luthier Doug Cox, our good friend from West Brattleboro, VT and the donor of the cello which we sent to Iraq earlier this year, was kind enough to go over the instrument, make a new bridge, and fix necessary issues. 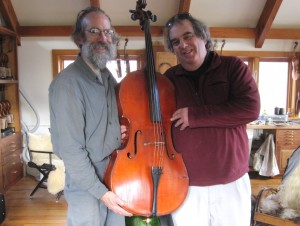 On December 12, the day after our arrival in Ramallah, Nadia and Sameh Abboushi hosted us for a wonderful visit and meal. Ziad and his wife Joyce Halrouny, Director of the  Ramallah Friends School, joined us for the sumptuous traditional Palestinian feast. We were able to hand the cello off to Ziad, and he will continue the adventure. 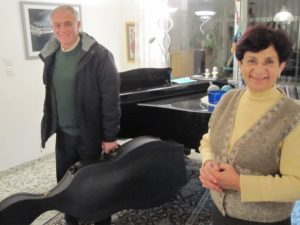 Ziad with the Sonad cello, with Nadia and her lovely grand piano looking on

Transportation into Gaza is intensely difficult, with paper work, check points, and security demands well beyond the experience of almost everyone, but we look forward to the cello’s safe arrival at the Gaza Music School under the guidance of Al Qattan Foundation. 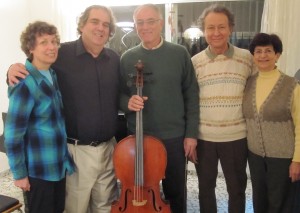 Our voyage took us from frigid Canadian air in Boston the evening of December 10, through Terminal 5 in London’s Heathrow Airport the morning of December 11, to Ben Gurion Airport in Tel Aviv.

We had to weather a lost luggage scare — someone had moved our luggage off of the luggage belt at Ben Gurion airport, but eventually we connected. We were doubly glad, however, that we had not put the cello into luggage.

Our good friend and driver Fadi met us and took us to our hotel in Ramallah, through one uneventful checkpoint, and in the midst of a driving dust and rain storm, with unusually frigid temperatures.

DECEMBER 12 – REHEARSAL FOR CONCERTS AT RAMALLAH, JERUSALEM, AND NABLUS 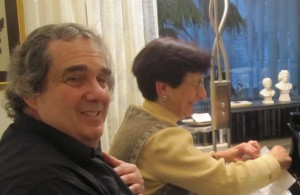 The program for the tour is: 3 Scarlatti Sonatas: Schubert Rondo in A for four-hand piano; Brahms Clarinet Sonata in E-Flat; Chopin Ballade in F Major and Two Nocturnes, Op. 27; and Steinmetz Etude No. 2 (2010) for Piano and Audience. 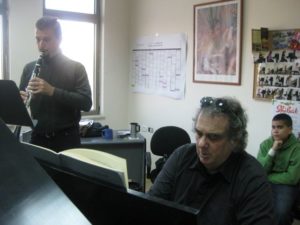 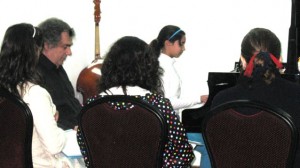 There was a sweetness to the piano master class onstage at the concert hall. All the students are well taught by Nadia and her piano colleagues, and their energy towards piano playing was reverent and positive. 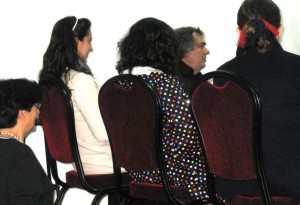 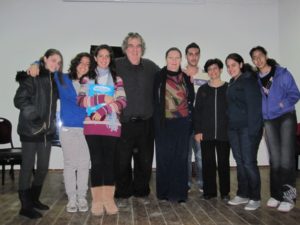 With teachers and students after Ramallah master class

The concert that evening was extremely enjoyable and well-received. Afterwards, we had delightful hospitality at the home of Rimah, the Board Chair Emeritus of the Edward Said National Music Conservatory, and Kathy and I connected with Ramzi at Aburedwan of Al Kamandjati at Pronto Restaurant. 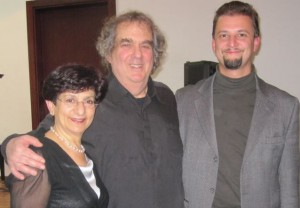 With Nadia and Peter after Ramallah concert 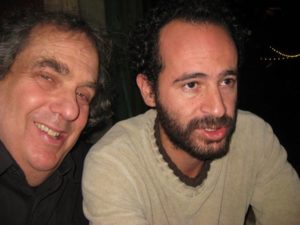 Connecting with Ramzi in Ramallah

Our friend Joyce Halrouny, Director of Ramallah Friends School and wife of Ziad, is kind enough to give us a tour of her school. They are doing beautiful work, including fine environmental studies and cultural awareness, in addition to excellent academics.

We promise to gather information to help Joyce have some work done on the Steinway grand in the Friends School refurbished assembly hall. 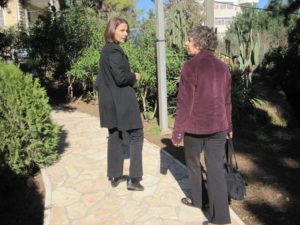 That afternoon, Nadia is not able to go with Peter Ninaus, Kathy and myself into Jerusalem; she is forbidden to travel there by the Israeli authorities, as are most Palestinian residents of Ramallah.

We are saddened by this, but decide to go to the conservatory there to support their work, which they really want us to do. 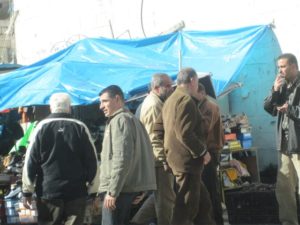 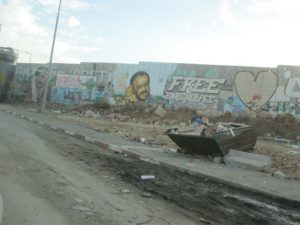 Palestinian side of Wall of Separation, enroute from Ramallah to Jerusalem

The trip into Jerusalem from Ramallah follows the now familiar pattern of driving to the main Ramallah/Jerusalem checkpoint, then turning left and joining the large line of traffic going through Jericho into Jerusalem, avoiding the checkpoints.

The question remains: If the wall is so frequently circumvented, what purpose does it serve?

The master class and concert in Jerusalem are well-received. The Jerusalem branch of the Conservatory will be moving into a beautiful new facility next year. 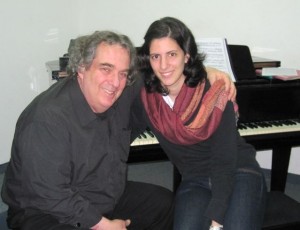 With Mona after Jerusalem master class. She is a piano student at the Jerusalem branch of the conservatory, and piano instructor at the Nablus branch 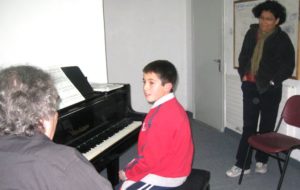 With Sera and his teacher, Jerusalem master class

Nablus is a city with a history of difficult and intense occupation. As recently as two years ago, life was extremely harsh, with most activities and schools suspended, and basic services shut down. However, there is now a bit of a rebirth, with a spate of new construction and businesses, and a spirit of optimism.

The Nablus branch of the Edward Said Conservatory has just opened, and serves 125 students. We are honored to be with them. The checkpoints between Ramallah and Nablus are minimal. 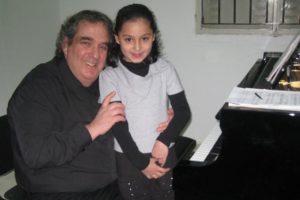 After concert in Nablus 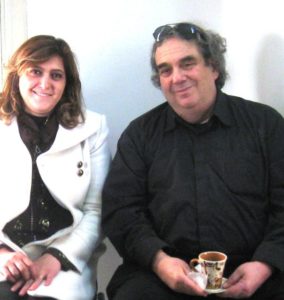 Tea with Director of Nablus Conservatory 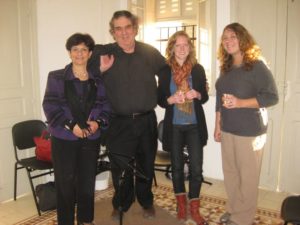 With Nadia and two young instrumental teachers at the Conservatory 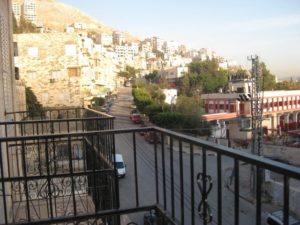 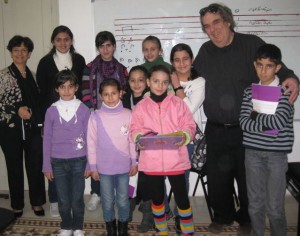 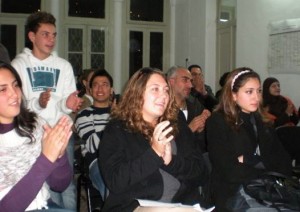 Audience clapping their part during performance of Steinmetz Etude No. 2 for piano and audience, Nablus concert 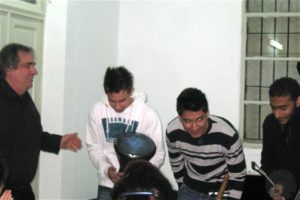 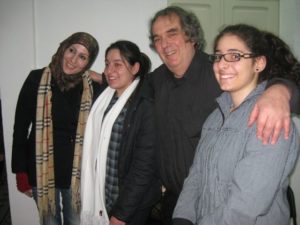 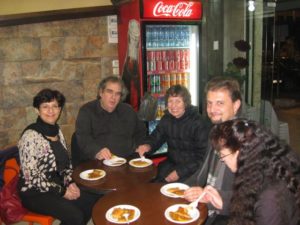 Nadia tells us that the Director of the Nablus Conservatory, a delightful, very professional woman, has been unable to visit her family and friends in Jerusalem since 1999. Sad and striking information. 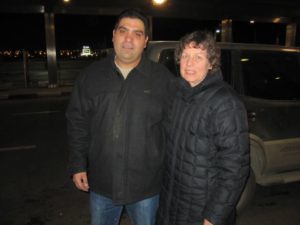 Bidding adieu to our driver Fadi at 4:30 AM at Ben Gurion airport

Our trip has been amazing and great. We will be returning in January to Amman, and in February to Israel for a Sonad workshop at a kibbutz and a residency at Jerusalem Conservatory Hassadna.

Question: If you want tomorrow to be different from today, what are you willing to do differently today from what you did yesterday?

Answer: Create beautiful music and art, and love the children (of all ages) always and intensely and more and more.

Thank you! This is such a privilege and honor!

With all our love, Eric and Kathy Stumacher